In May, I had the distinct pleasure to direct a staged reading of Dean Poyner’s Together We Are Making a Poem in Honor of Life featuring Shannon Hoppe and Brent Maddox for Tennessee Repertory Theatre’s Ingram New Works Festival.  This was an incredible experience and one for which I will be eternally grateful.  The air is so electric at new play festivals; I literally got a contact high participating in the emerging playwrights’ works. Which was good, since the university semester was ending and I was exhausted.  The New Works Lab this year featured playwrights Nate Eppler, Dean Poyner, Andrew Kramer, and Jeremy Sony.  All of their plays blew me away, as did the readings’ actors, directors, and stage managers.

I found Doug Wright to be extremely gracious and kind.  He said super nice things to me and my cast about our reading — I acted cool but I exploded on the inside while he spoke to me. Here’s a photo from the after-party: 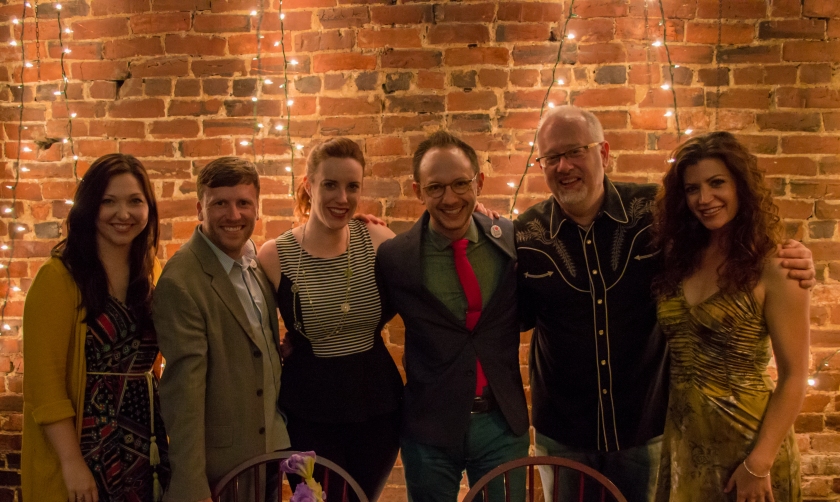 Overall, the experience was beautiful.  I learned so much, as I always do working with giving artists. And Together We Are Making a Poem in Honor of Life really touched my heart in some new ways.  Art is such a magical, mysterious thing.

POEM SYNOPSIS: Marked by a senseless tragedy, a couple tries to navigate the storm of grief that follows in the wake of their child’s death. Through a series of support group meetings for grieving parents, they struggle to comprehend and remember in an attempt to reconcile what they’ve lost. But as they confront their harsh new reality, they find it difficult to connect with each other in this new discordant world. A powerful and poetic exploration of what it means to live through unimaginable loss.